Decontaminated items may be removed for disposal and/or future reuse, due to space or laboratory demolition or renovations. Fogging, as performed by DRS, is typically performed using solutions that contain active ingredients either a peracetic acid/hydrogen peroxide mixture (such as Spor-Klenz or Actril) or chlorine dioxide (such as Clidox).

The fogging is performed with B&G ULV fogging equipment, which quickly disperses chemicals at varying aerosol droplet sizes, and gives a high standard of coverage. The chemical will be delivered (line of sight) by the direct use of hand-held foggers or pneumatic pump sprayers.

Choose from a variety of chemical treatments: 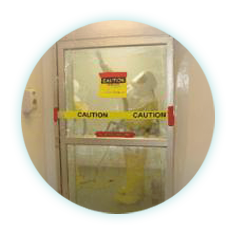